Phyla
is Jennie Zimmermann and Gisbert Schürig.
We make music, often in the context of dance and performance, preferably using voice, electronics and guitar. 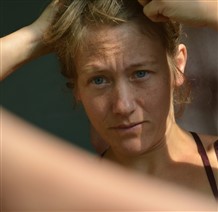 Jennie Zimmermann
works in the intersection of somatics, dance and sound.
Within her love for subtle details, fragments and little snippnets she started experimenting in layering sounds with a loop machine.
She arranges durational minimalistic polyphonic improvisational setups for performances, dancing, listening and sensing.
Her research and work is influenced by Contact Improvisation, Roy Hart Theatre Voice Work and Experiential Anatomy.
2015/16 she followed the Laban/Bartenieff Movement Studies Program at Eurolab Berlin.

Gisbert Schürig
began experimenting with sounds as a kid, using manual tempo manipulations on a conventional tape recorder, thus altering the pitch of recorded piano sounds, giving them a strange, surreal quality.
With a Korg Poly-800, one of the first affordable digitally programmable synthesizers, he started exploring the possibilities of artificial sound.
He has been playing electric guitar in rock bands since his teenage years. Because of a love for the sound of the nylon stringed acoustic guitar, he started to study classical guitar in Cologne in 1993 but dropped out soon. Around this time, he also attended lessons in musical improvisation of composer Bojidar Dimov, took part in MusiQuantik courses of Klarenz Barlow and had a first encounter with overtone singing.
This interest eventually lead him to take part in the first overtone singing class of Wolfgang Saus and to intensive studies in throat singing techniques, collaborating with Felix Mönnich and Kolja Simon of Alien Voices. Being fascinated by african polyrhythms, he studied it´s subtleties in workshops by Anita Daulne (Zap Mama), Francesca Pedulla and pygmies from Kongo. Currently he is researching the potential of generative processes in improvisation and computer music.