Chordal structures in the overtone scale

In the overtone scale, the five basic types of three-note chords can be found.
In his book ‘Basic Harmony’ Werner Pöhlert decribes these five chord types.

On the left, you see the overtone scale on the main pitch of A, on the right are the different chord types and the positions of their parts within the scale. 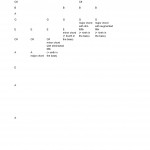 Werner Pöhlert derives the chord types from a major chord by sharpening or flattening the third and fifth by one halftone step.

It´s interesting that these types are already there, within one note, as a part of the overtone scale. We have here a point of intersection between the physical features of sound and musical theory derived from musical practice.

What is Minimal Improvisation?