Form and fluidity in minimal improvisation 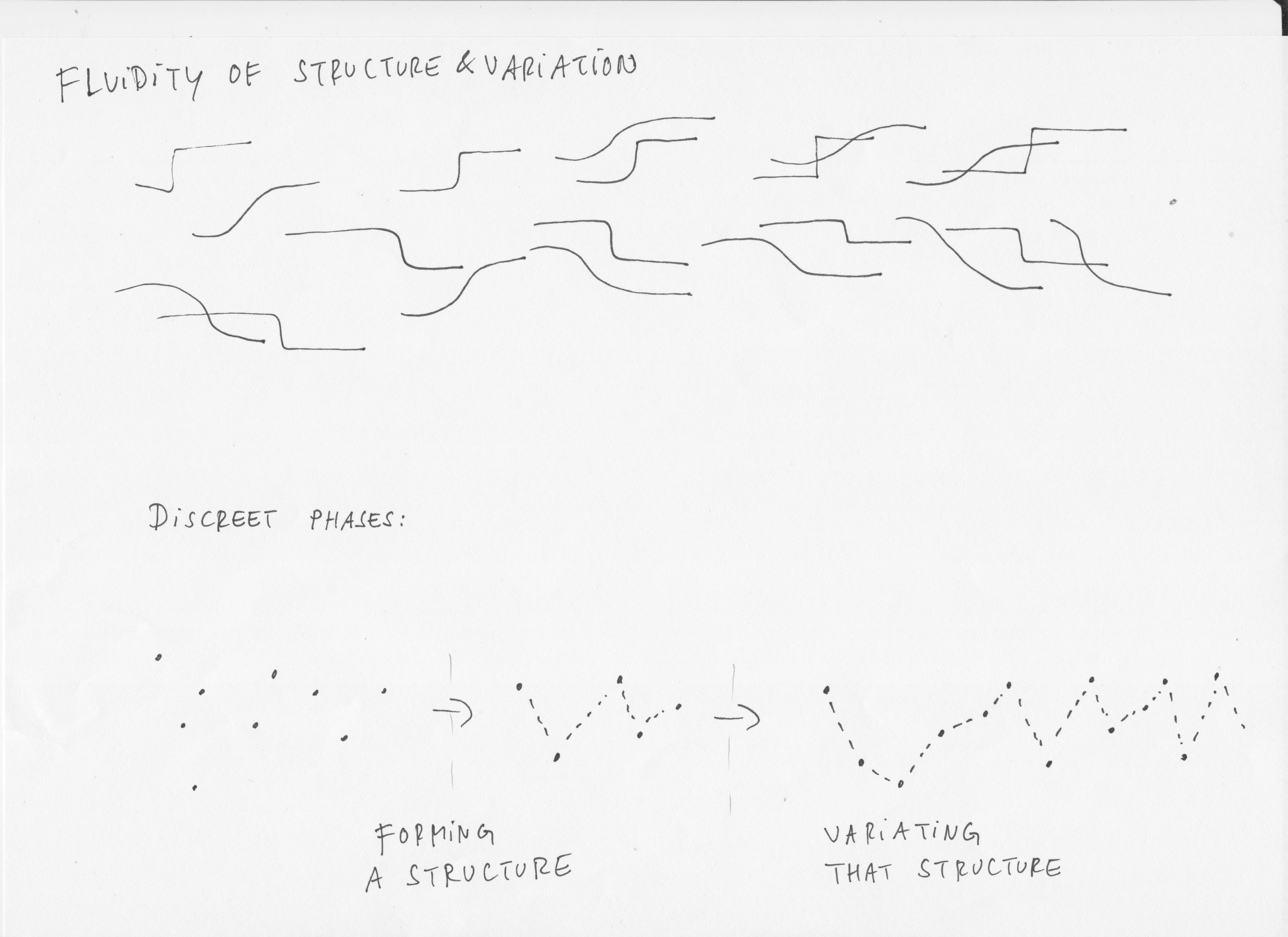 In conceptualizing our form of minimal improvisation, we initially split the whole process in six phases. The first four phases provided a framework for establishing a sequence of activities or a rhythmical pattern which could serve as a starting point for further variations and developements in phases 5 and 6. Working with these phases, we have been able to cultivate delicate processes of scattered sounds and movements slowly coming together to a distinct form, like a sensual demonstration of consensus in a group.

But once such a consensus is reached, moving on to the next phases can be difficult.
First, up to that point the group has worked in the direction of defining something, crystalizing a definite form. Adding variation to this form may not feel like a step forward, embellishing and enriching that form, but like a step back into disintegration, and the possibility of another pattern emerging from chaos. Going back and forth between chaos and order came up many times in our research and also it´s a basic pattern of collective improvisation in general. I like it, but I don´t want to be stuck with it when aiming for something else.

I guess the solution is time. Time dedicated to the undistracted repetition of a pattern, the keeping of a form, inviting it sink in on a physical level so that it can become a really stable ground for further variations. This way, such variations form a continuity, further developing the form and not a meere movement to something else. In minimal improvisation, there are no fixed functions assigned to the performers, there is no rhythm section devoted to hold it all together, no soloist to stand out. That offers freedom and flexibility, but it demands a higher degree of care by all performers for that subtle balance between these functions. It takes time for a specific group of performers to find it´s balance, and I think the minute phenomena of the temporal interplay within a group can best be cherished when exposed in the light of constant repetition.

But there is another answer to the problem of finding a balance between form and variation that came up in our research. Instead of aiming for a collective process with distinct phases, order, variation and chaos can be balanced on an individual level. Have a look at this briliant minimal improv performance by Naima Ferré and Gali Kinkulkin to get a sense of what that means. With this ‘modular’ approach, we no longer aim for a collective pattern that has to be spelled out and repeated in a definite form. Instead, each performer is meandering between repetition and variation using individual gradual change. The interdependence of these individual activities will lead to a collective structure, emerging from continuity and relation between these activities, without requiring the performers to take care for the overall architecture of the performance.

Both approaches appeal to me, they are quiet distinct directions to move on with minimal improvisation.

Looking at the first approach again, there are different options when aiming for a fixed pattern, a fixed sequence of elements: 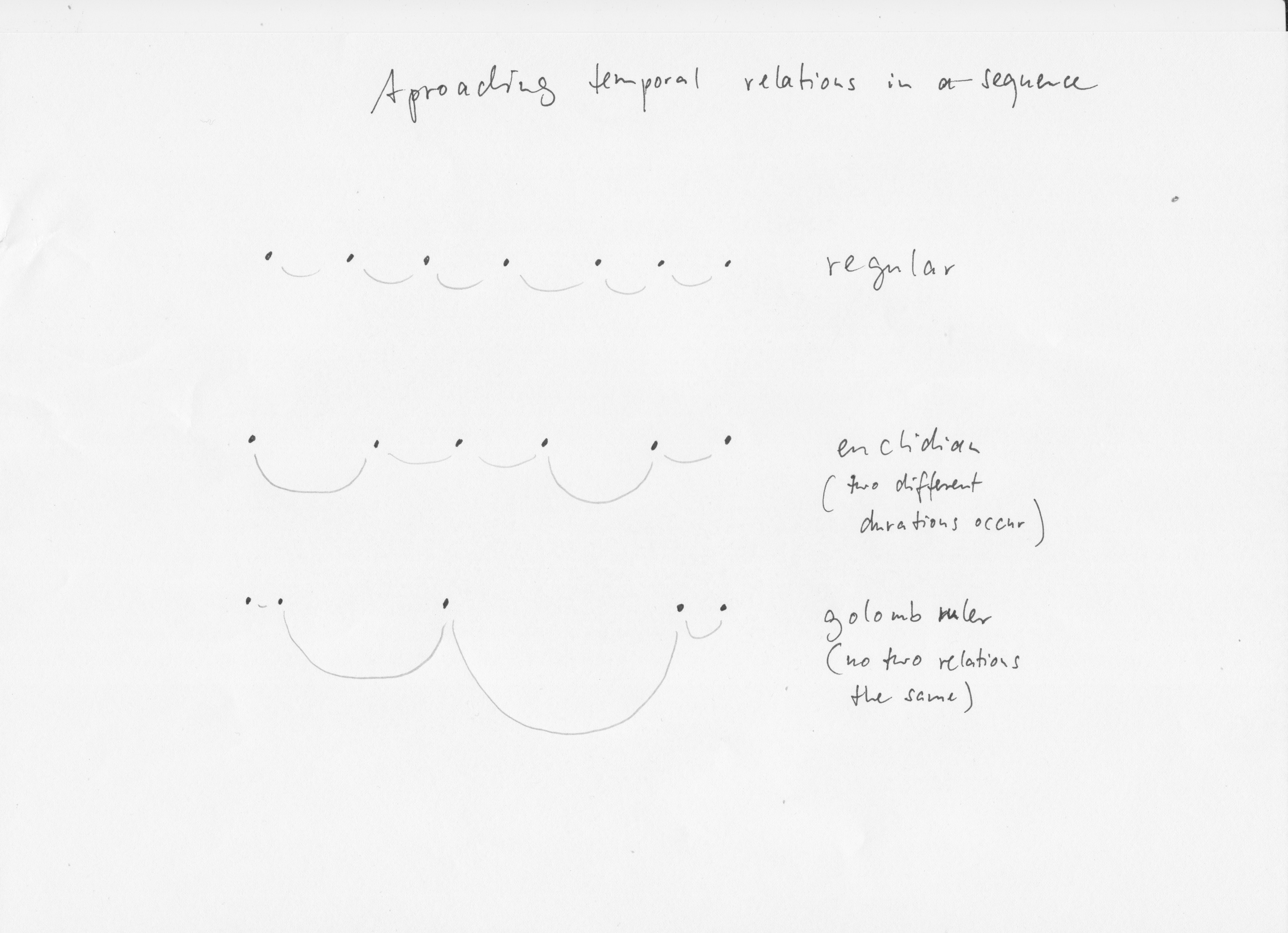 – The group may strive for regularity, stringing up all the elements on a chain of isochronous pulses.

– The group may go for two different rhythmical intervals, forming a sequence by a combination of durations of 2 or 3 pulses.

– The group my strive for maximum uniqueness of the rhythmical constellation of each element.

The first option may be the ‘easiest’, but especially it´s simplicity may be a very efficient way to build very complex structures, making use of it´s ambiguity like in techno music, utilizing accent shifts, filling up between elements like in gamelan.

The second option resembles the euclidean rhythms used in groove-based traditional music and rock and dance music around the world, Godfried Toussaint, Professor of Computer Science, offers a valuable insight into these from a mathematical perspective. In contrast to the first option, euclidian rhythmical patterns have an articulate rhythmical profile, combining inherent tension with the cohesion provided by it´s Gestalt. Further developement can make use of the character of the distinct profile, increasing it´s internal dynamics or dwelling upon them.

The third option is inspired by the Golomb ruler, that is ‘a set of marks at integer positions along an imaginary ruler such that no two pairs of marks are the same distance apart.’ (Wikipedia). I came across this while checking out the possibilites of the ADDAC402 – 4 Voice Heuristic Rhythm Generator which offers a mode of sequencing based on Golomb rulers. I love the idea of giving each element it´s very specific place in the overall constellation and isn´t it a lovely group activity of sorting this out in improvisation? Not to perfection, but trying. It´s obvious, that such a process is more difficult, time-consuming and delicate than the first option of sorting elements. Also, regular repetition may be a more complicated task as regularity is what is missing in the pattern itself. But probably these difficulties help avoiding feelings of monotony and thus make it easier to repeat such patterns over time as it feels more rewarding to actually master that group effort of coordination and accuracy.