Looking forward to a second research period in 2015 which will culminate in a work-in-progress-showing at Unfinished Fridays on November the 20th, it´s time to recapitulate our research in September. 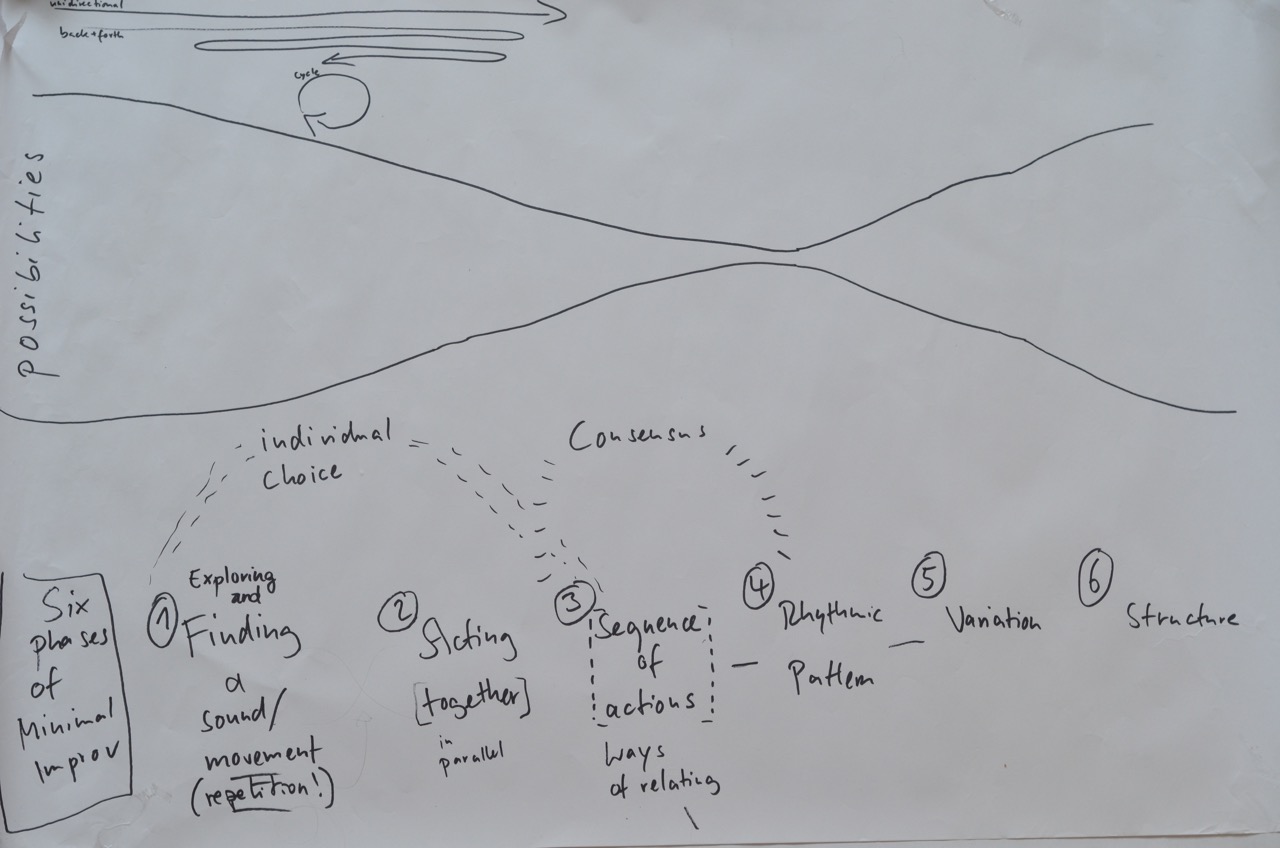 We had an intense and interesting time researching minimal improvisation at the Plateau Gallery in Greenhouse, Berlin.
Next to Jennie Zimmermann and Gisbert Schürig, Naima Ferré, Christin Dross, Vincenz Kokot, Gali Kinkulkin and Sebastian Flaig were taking part. Our main question was the integration of movement and music in minimal improvisation. Being strongly influenced by contact improvisation, movement was a big issue in minimal improvisation from the very beginning, but conceptually, the focus has been on sound, movement had it´s place in warm-ups or occassional impulses. Also, I feel some hesitation to link music and movement conceptually – the independence of both being a valuable acquisition of modern avantgarde. Who wants to fall back into old patterns? Also, why reinvent something that is still there, there´s lots of traditions where the connection of music and movement are the default.
But then, connecting music and movement is different when you don´t take this connection for granted, when you explore it like unknown territory. Maybe we will dig up stuff that has been around for quiet some time, but the digging will make it our own.

In music, at least in western music, the concept of one note is widely known and understood. Even if you can´t read a score, you know what that dot with a line symbolizing one note looks like. So approaching improvisation from the musical side, there is some common conception when talking about ‚one’ sound. That black dot is an isolated element, one sound on a backdrop of silence. Practically, there is no such thing as silence, musical sounds are always part of a continuum of sounds. But the way we visually conceptualize it is one event surrounded by nothingness. In dance, scores that isolate single actions are far less widespread than in music. There is a strong sense of continuity conveyed by the uninterupted presence and visibility of the body and of the space.

Towards a more open approach to minimal improvisation: 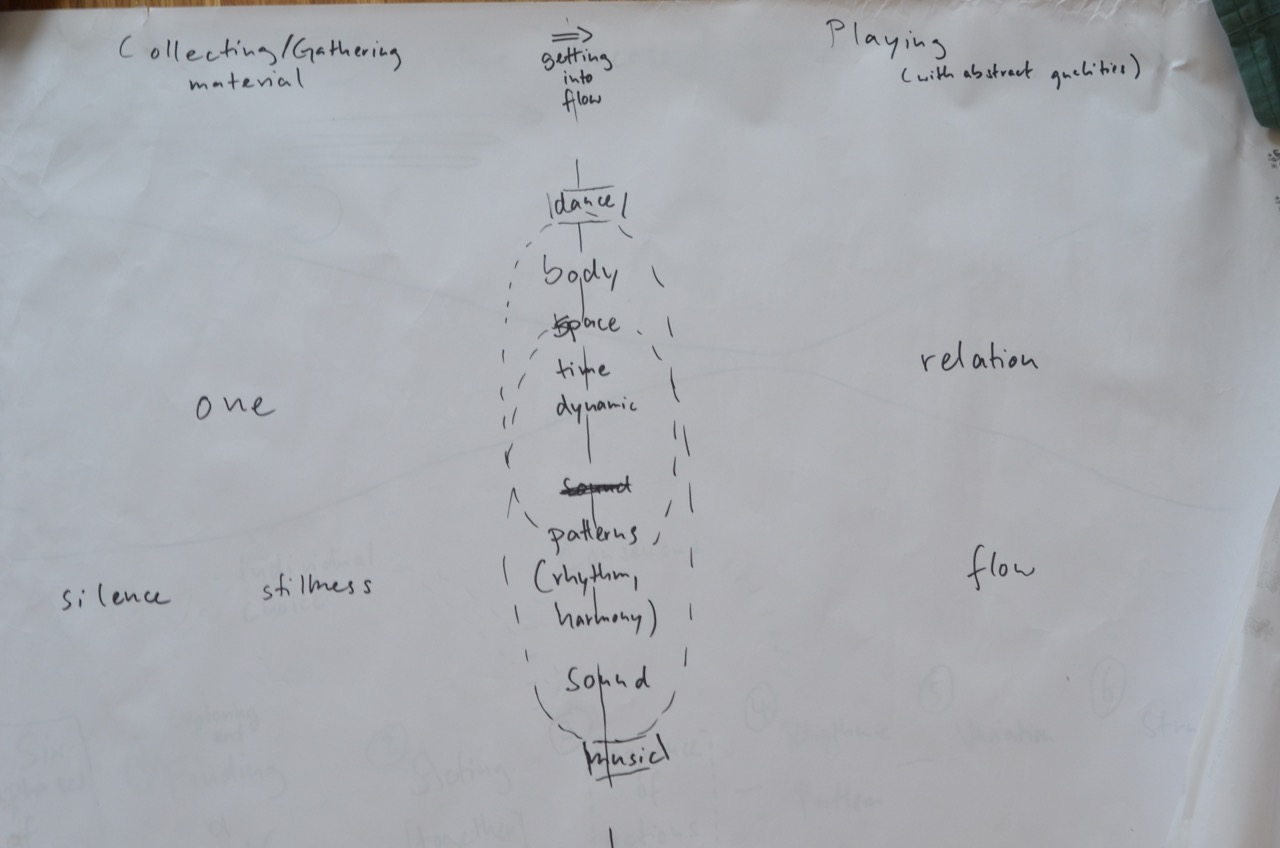 In minimal improvisation we rely heavily on the concept of silence, all the sounds are supposed to be performed and heard like poetry, with lots of white paper around a few words. Applying this to movement, we worked with a lot of stillness but had to take into consideration that postures can also be pretty ‚loud‘. We did not come across a patented solution but we did make things work out fine for us by raising the sensibility for these questions. Minimal improvisation works with an assemblage of single, discontinuous elements or actions, be it sound or movement on a backdrop of nothingness, be it silence or stillness. Sounds pretty simple, but to actually get to the point where that felt right was quiet a journey.

Once we got there, work wasn´t over. Minimal improvisation starts with individual actions blending into collective activity. To make that work, I always opted for time and rhythm as a common ground. Being a musician hooked on rhythm this is pretty natural. But the specific musical concepts of rhythm, metre, bars, patterns – these are not the first choice of modern experimental dancers. Dance just got rid of the slavery to this in the last century… While I am very much in love with the physicality of music and body connected in rhythm, it´s also obvious that a common ground needs to be accesible. And in modern dance, there seem to be much closer affiliations with the presence of the body, dynamics in space and time and such. So we opened up the point of reference for all qualities that can be perceived and controlled to serve as a common ground for a group of improvisers. This opens the scope of minimal improvisation quiet dramatically and to be honest, at this point I am not really sure how I feel about that. A narrow focus is useful to develope virtuos collective interplay, which can become diffcult with too much openess and flexiblity of the concept. But then, I love art that contradicts itself, that dwells on paradox, so let´s go with this one.